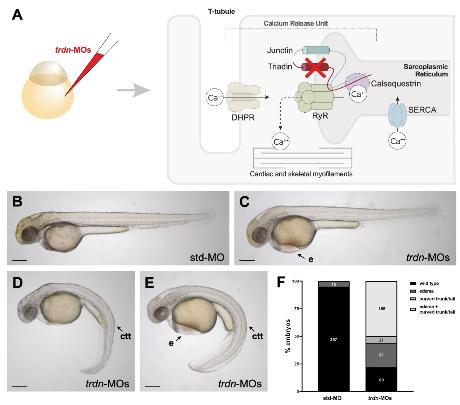 Triadin is a multiprotein family comprising three isoforms expressed in heart and skeletal muscle and arising from alternative splicing of the TRDN gene. TRDN loss-of-function mutations were found in patients affected by a genetic arrhythmogenic disorder: the Triadin KnockOut Syndrome (TKOS). Previous studies suggested a role for Triadin in maintaining the calcium release complex, thus playing a role in excitation-contraction coupling. However, precise roles of Triadin, as well as pathogenesis of TKOS are still largely unknown. Here, we first characterized trdn expression during zebrafish embryo development and then we generated a zebrafish TKOS model by means of co-injection of two trdn morpholinos. trdn-MO injected embryos presented heart edema and defects in the trunk/tail region. Despite the overall structure of both heart and skeletal muscle was not altered, trdn knockdown resulted in a dysregulation of cardiac function with reduced heart rate. Such reduction could be rescued by administration of arrhythmic drugs to trdn-MO injected embryos and, partially, by co-injection of human wild-type, but non mutant, TRDN mRNA. We also tested conventional anti-arrhythmic drugs and we observed that they efficiently reduced the heartbeat of both wild type and trdn-MO injected zebrafish embryos.